When do you update this thing?

It changes according to my (outside of art life) schedule. Right now TWIDI is on hiatus as I work on graphic novel and another webcomic, but I have every intention to return when the time is right.

The comic updates in batches.

Check the front page announcements for the update schedule at the moment.

How do you read this comic?

This is a story that focuses on a set of characters (see Cast), explored via 3 layers: Detective Grimsley’s individual cases, each character’s backstory/slice-of-life interactions, or/and a central slow-burn plot.

The archives are organised hierarchically, from Volume -> Chapter -> Chaplettes.

Think of it as a TV show, with seasons, B-plots and an ensemble cast. Or like a long-running manga.

How many volumes will there be?

4, containing approx. 100 stories. We are at Volume I currently, with 7 Chapters.

>What is the difference between Chapters and Chaplettes?

Chapters contain major plot points or rather big cases, and have more or less over 60 pages.

Chaplettes are (very) short stories* squashed in between Chapters, for character development and world-building and as an outlet for experimenting. It’s not necessary to read ALL of the Chaplettes, but it’s always important for insight and a better understanding when a Chapter happens.

*the backstory chaplettes are pretty big.

What art software/program(s) do you use?

How is this comic done?

It depends, but I would call it a mixed media comic. This comic allows me unlimited creative freedom on how I want to approach a story, so one chaplette can be entirely drawn in pencil, and the other drawn digitally, and the next can be both (imagine, a collage comic). The only things that are constant are that I write gibberish on the computer, and do thumbnails on paper.

What is the genre of this comic?

I’ve no idea actually because the genres covered by TWiDI are extremely broad. It’s not strictly horror, mystery and fantasy. The closest I can get is a hybrid between occult detective fiction, gothic satire, cozy whimsy and urban fantasy.

How old is this thing?

How old are you?

I’ve the appearance of a millennial.

Grimsley is a Jersey Devil, with the skull and appearance of a donkey. He originated from a brood that was displaced from America some decades before his birth. 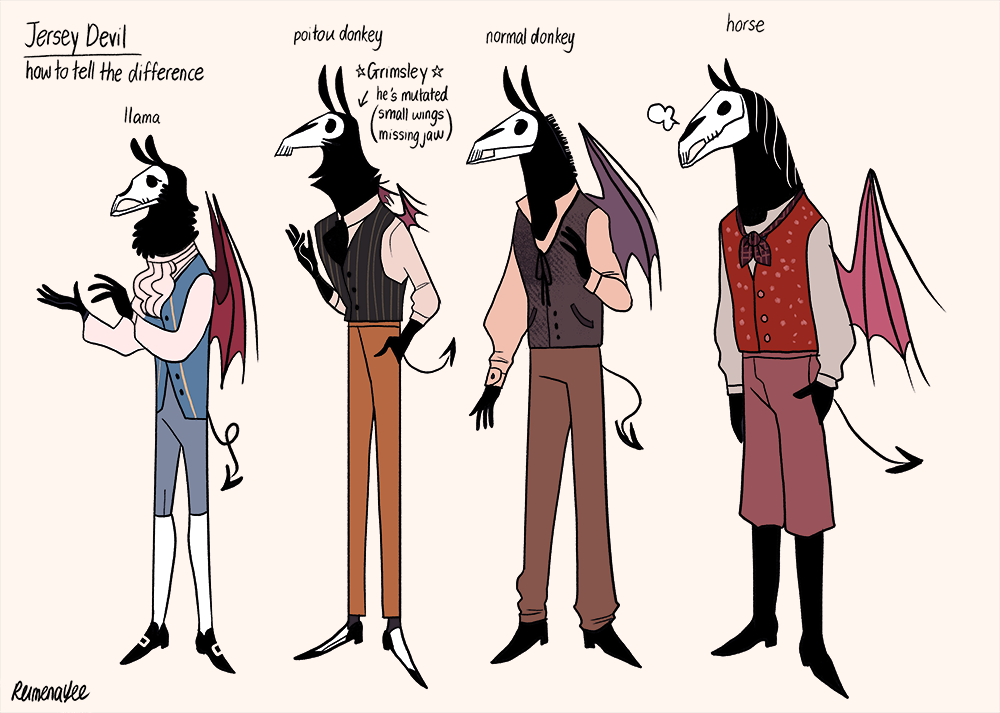 How diverse is this?

Any more questions? Send them here through Tumblr